Biking in Israel is becoming one of the most popular ways for Israelis and tourists alike to enjoy and explore the country. The renaissance in cycling which Israel has seen in the past decade has led to thousands of kilometers of trails being marked across the country, from the depths of the Negev Desert in the south, to the hills of the Galilee in the north, and everywhere in between. In cities, biking is also taking off, with trails and bike rental schemes becoming incredibly popular. No matter what your level of experience, biking in Israel is accessible and enjoyable, and a great way to explore the country. There are also some amazing bike tours in Israel.

Cycling in Israel is an immensely popular leisure activity for Israelis. On weekend mornings, the roads across Israel are full of cars carrying bicycle racks as riders travel for hours to reach their favorite trails and groups meet up for their weekly rides.

A National Cycle Trail set to run from Metulla in the north to Eilat in the south is currently under construction, however elements are open, however, many other official biking trails in Israel trails have been created by organisations and individuals who love the sport.

Biking in the Negev

In the Negev Desert which covers more than half of the total land area of Israel, and accounts for the southern portion of the country, huge efforts have been made to create large numbers of bike trails which are accessible for bikers of all levels of experience with great success. Biking trails in the Negev are widely accessible and with great supporting infrastructure, a brilliant way to explore the region. Read more about biking in the Negev.

Biking along the Tel Aviv Tayelet (Promenade) by Flavio Grynszpan

In Tel Aviv, biking has become a popular means of getting around the city with a recently initiated bike rental scheme, Tel-O-Fun, bikes can be hired from tens of spots around the city. As well as biking on the road, the HaYarkon Park, Tel Aviv’s green lung offers some great paved trails, and the region surrounding Tel Aviv, the Coastal Plain, is flooded with Tel Avivians at weekends who cycle away from the city, into the beautiful nature. There are Tel Aviv bike tours running twice a week and these provide an insiders way to explore Tel Aviv by bike.

Jerusalem might not appear to be a great city to bike in, but with more and more bike lanes being opened up, it is gaining popularity. With narrow streets in the older parts of the city, the biking in Jerusalem allows you to go where the car won’t allow. Regular bike tours of Jerusalem are popular with visitors to the city, and the nighttime bike rides are incredible.

Biking in the Israeli Coastal Plain

The Coastal Plain is probably the most popular region for biking in Israel as a result of its accessibility to the major population centers of the country. With hundreds of trails of varying lengths, through the rural expanses, forests, and parks of the region, Israelis head out at the weekends to explore the beautiful nature that sits on their doorstep. Trails are being developed all the time, and new trails like the Ben Shemen Forest Biking Trails attract great deals of attention.

Biking in the Galilee

Biking in Israel’s Galilee region offers a more European experience to much of the rest of the country, with the landscape characterized by valleys, hills, and passes providing varied trails for bikers of all level of experience. As well as dedicated bike trails, as across the country, many bikers follow hiking trails such as the Jesus Trail or Golan Trail, with small variations (to cater for bikes), while in the far north of the country, at Israel’s only winter-ski resort in the Golan a summer mountain bike park is operating – the Mount Hermon Bike Park.

Information about biking in Israel 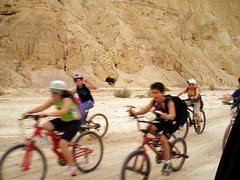 Kids biking through the Negev by mr. toaster, on Flickr

Bikes can be rented relatively easily across Israel, often at the site of a ride, and the whole country is mapped at a 1:50,000 scale for off road navigation, the only problem being that maps  are generally only available in Hebrew (English maps are becoming increasingly available although for people who can read Hebrew it isn’t generally too big an issue). If this is an issue, you get around it by joining up with an Israeli biking group or club or going biking in Israel with a guide (for more information read about private tours and fill out the form – we can connect you to a specialist guide). Most Israeli Mountain Bike Guides have completed a special training program at the Wingate Academy, Israel’s top sports school.

When biking in Israel, helmets are required by law and, although water is not, it is equally important. Make sure you have plenty especially if you are biking through rural areas. In case you aren’t driving, it is possible to take bikes on inter-city buses in Israel for free.